DRFT (Ɖ) is a commons currency for sharing resources among broad groups of people. The currency incentivizes management of otherwise private resources as common pool resources1, in a way that provides greater security, and net greater access to resources, than participants would have otherwise.

DRFT uses market demand to trigger the minting of new D, decentralizing trust requirements for participation. It then pools the income earned across all resources and redistributes it to participating members, in a way that helps underwrite the risk of providing access.

Internally, the DRFT currency asserts a logic that values one night of accommodation equally, anywhere in the system 2. Although a night in the country is often cheaper than a night in the city, and costs of living differ around the world, this assertion intentionally shifts value exchange outside the speculative real estate market, prioritizes mobility and access, and creates space for other forms of value to be cultivated, such as culture and community.

We can also think of DRFT as a “housing-backed currency.” Such currency can be used for many things, and is not limited to trading for housing, but can also be traded in arbitrary ways (mostly outside the scope of this article). Like all currencies, whether a secondary market arises is a function of many things.

If you’d like to read about the technical details, read on!

Consider the use of DRFT in a network of independent houses, each with some number of bedrooms. Those rooms have primary residents, who may opt to make their room available to guests when they travel. Each may independently decide whether to participate in the DRFT system (we will show that the system works fluidly with both).

Members earn Ɖ by hosting guests or members: your account is credited Ɖ1 for each night that a member or paying guest stays with you (more on that below), and debited one Ɖ for every night that member stays elsewhere in the network.

Although anyone can sign up, people have to choose to stay in your space, for you to earn Ɖ.

Of course, this alone would result in an incentive to host paying guests over members, since a host effectively earns twice from paying guests (Ɖ and $).

To address this, we shift some of the dollar income from the guest host to the member host by pooling guest income earned in hard currency, at the network level, and re-distributing it amongst all hosts. These distributions are issued in proportion to the cost of the room. (More on this in the incentives section). So if your room is 1/3 the price of another room, your distribution would be scaled appropriately. This means you earn less from a paying guest, on a given night, than you would in a vanilla system (because some of it is distributed to other hosts); on the other hand, you earn something every night there are paying guests in the network, even if you only hosted a member who paid with Ɖ. 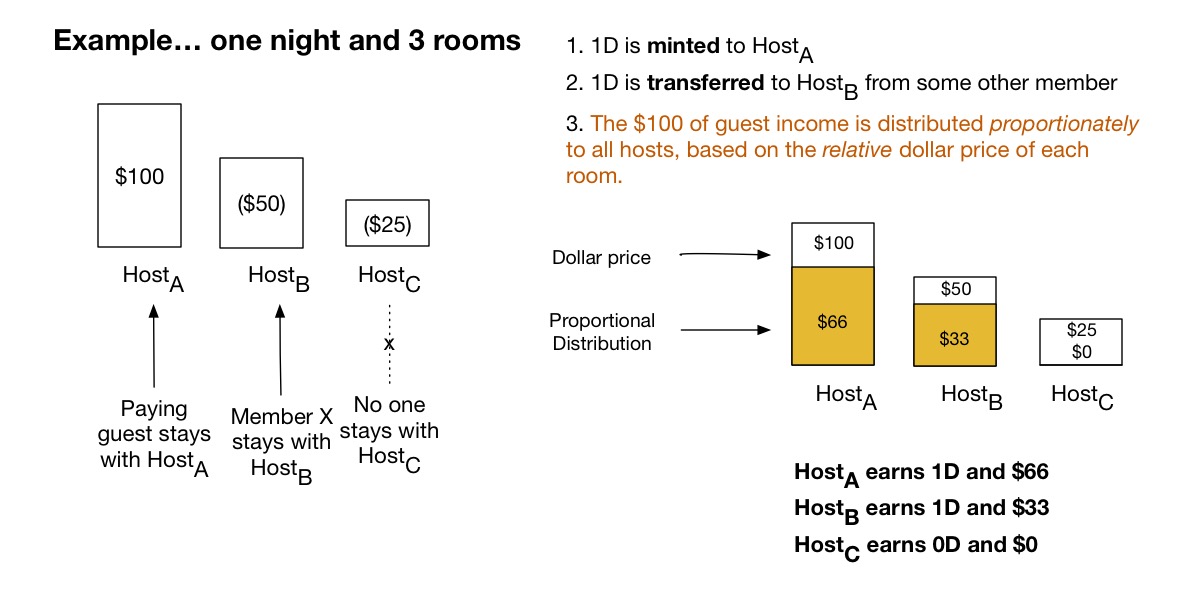 The currency supply needs to be controlled, or the above algorithm will be highly inflationary. This is something that has not been decided on yet, as the dynamics of the system are not entirely clear. Demurage is one option, as are earning caps.

For demurage, one approach could be designing Ɖ to expire as a function of age, as a way to incentivize use. Alternatively, each time there is a proportional distribution, it could trigger a re-valuation of existing Ɖ (this is likely to result in fractional Ɖ, which feels inelegant, but it’s not clear this is a sufficient reason to avoid this solution).

The number of Ɖ one can hold at any time could also be capped, by the volume (supply) a host adds to the system.

As the currency is developed, users and hosts will be consulted on what approach best reflects the goals of the system.

Leaving the system If members decide to de-list their resource, what should happen with their DRFT supply? Since we are not preventing the exchange of Ɖ outside its use for housing, we dont have a reason to ‘take back’ anyone’s supply of Ɖ. Most likely, this would be handled by the general demurage algorithm which will be running anyway, and taking into account these and other changes in supply and demand.

Comments? Just double click anywhere! My website uses open annotations via a service from Hypothes.is. Check out the sidebar to the right.